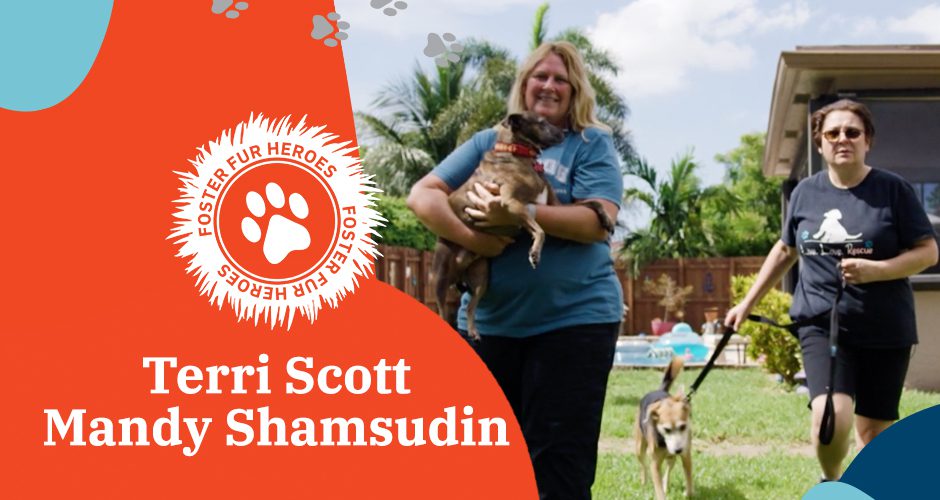 Since becoming the official laundry partner of Best Friends Animal Society (BFAS), we’ve  met so many passionate animal advocates. But these heroes exist in a variety of organizations—many affiliated with BFAS. To honor them for their efforts, we’ve gifted several special foster moms and dads a TR7/DR7 washer and dryer set to help simplify their laundry routines, allowing them to focus on providing the best possible care for their furry foster friends.

Today, we’re introducing you to Terri and Mandy Scott in Coconut Creek, Florida.

Blueberry was a puppy who never stood a chance. This is the cold-hard diagnosis Terri and Mandy Scott heard from an experienced emergency veterinarian. After Blueberry and her mom made the trek from Alabama to Florida, the odds stacked up against the days-old puppy. Many of the dogs on the trip with Blueberry passed away from suspected distemper, and she was beginning to develop symptoms with little to no immunity in her less-than-a-week-old body.

The world of animal rescue is like that—and fosters like Terri and Mandy are on the front lines. Over the last four years, they’ve experienced the joys and sadness that come from their commitment. And they fight like hell for the animals lucky enough to make it into their home.

Spend a bit of time chatting with Terri and Mandy and, within a few minutes, you’ll learn fostering dogs isn’t just something they do; this is their passion—a calling they didn’t know they were destined for until a few years ago. The duo are firm believers in animals finding them and not the other way around. So, however it happened, the stars aligned and drew them to a pet store to meet a terrified dog that had suffered abuse.

Afraid of everyone and cowered in her kennel, Zoey’s life changed that day when the two decided to adopt her. But before heading home with their newest family member, Terri and Mandy took time to chat with the rescue organization owner and determined they needed help to keep saving lives. It was then that their calling became more clear—they leaped into action taking on foster duties for seven five-week-old German Shepherd mix puppies.

“We were terrified,” Terri said, with a laugh that the challenge also came with “a lot of laundry.”

In these two’s care, the puppies thrived and, at 12 weeks old, they got to experience the best part of the foster process: adoption!

“Seeing peoples’ faces when they found ‘their puppy,’” Terri said, trailing off at a loss to describe the joy that comes from that experience.

Mandy also noted that, from the start, one puppy was struggling to grow, coming in at just one pound, and had them concerned. Because of this, they feared their first fostering opportunity might not go well. But, again, the stars seemed to align and placed this little one with the right people—a fact made all the more clear as that one-pound puppy became their very first  “foster fail.” With their first success (and fail) under their belt, Terri and Mandy continued to work with Milo’s Dog Rescue of South Florida—totaling north of 50 fosters over the last few years.

“Each time you learn something new,” Terri said.

Their efforts have brought a lot of stress and tears of joy but have opened their world in unexpected ways.

“They’ve [the volunteers at Milo’s] become our family with a common goal,” Mandy said.

Terri adds that their commitment and involvement have spurred others to help as well, whether through fostering, donating supplies, or helping in a myriad of other ways. However, Terri and Mandy are always quick to deflect the praise for what they do; it’s always about the animals.

When the cough set in, the veterinarian said using a nebulizer on the young pup might do some good, but to not get their hopes too high. If you still don’t believe how hard these two will fight for an animal they’ve only known for a few hours, this is the proof. Every three hours—for a week straight—Blueberry received nebulizer treatments. And gradually, she got better and grew.

But what came next was the real challenge: who would offer a home good enough for this dog they fought so hard for?

Their standards were high—however, the universe and Blueberry ultimately made that decision. Four months later, the two were at an adoption event when Blueberry had an accident on a prospective adopter’s shirt. Rather than freaking out, the man passed it off with a shrug—and it was then that they knew.

“Oh yeah, you found your new daddy,” Terri said. “It just felt like the stars aligned for that to happen,” she added of Blueberry finding them to find her new home.

Sometimes the stars do align, but it’s always good to have a dedicated foster duo as a connection to the universe.

“Your house is a little…chaotic,” Mandy joked of what friends often say upon entering her and Terri’s home.

That’s to be expected when you have a pack of hungry puppies ready to eat (and make sure their human friends know in the only way they can). That’s just one of the reasons we gifted them a TR7/DR7 top load washer and dryer set to make laundry day less chaotic, and give them more time to help the animals in their care. And time is one of the first things Mandy noticed.

“These are unbelievable,” she said, adding that loads are washed and dried in about a quarter of the time as their previous set. “We are actually loving them.”

For Terri, it was a new smell (or should we say lack of smell) that struck her from the very first load washed in the TR7.

“The first dog blanket we washed in the Speed Queen, it didn’t smell like dog,” Terri noted of the fresh smell—something that couldn’t be accomplished with their previous set, regardless of the number of extra washes and rinses.

Between the speed of the cycles and wash results of the TR7, and the Pet Hair Remover cycle and fast drying of the DR7, the Speed Queen set has been a welcome addition to the Scott home.

Now that they are believers, so begins the task of testing the commercial quality.

“We want to see just how much we can throw at them,” Terri said with a laugh. It started with heavy dog blankets and is now up to large dog beds. “We are washing literally 24 hours a day.”

To learn more about Milo’s Dog Rescue of South Florida, visit their website. And if you want to meet more of our foster heroes, visit speedqueen.com/foster-fur-hero. 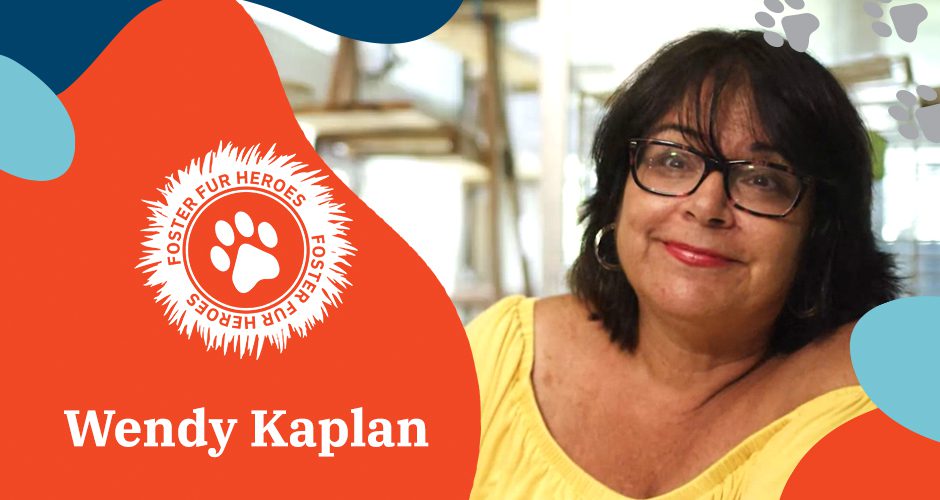 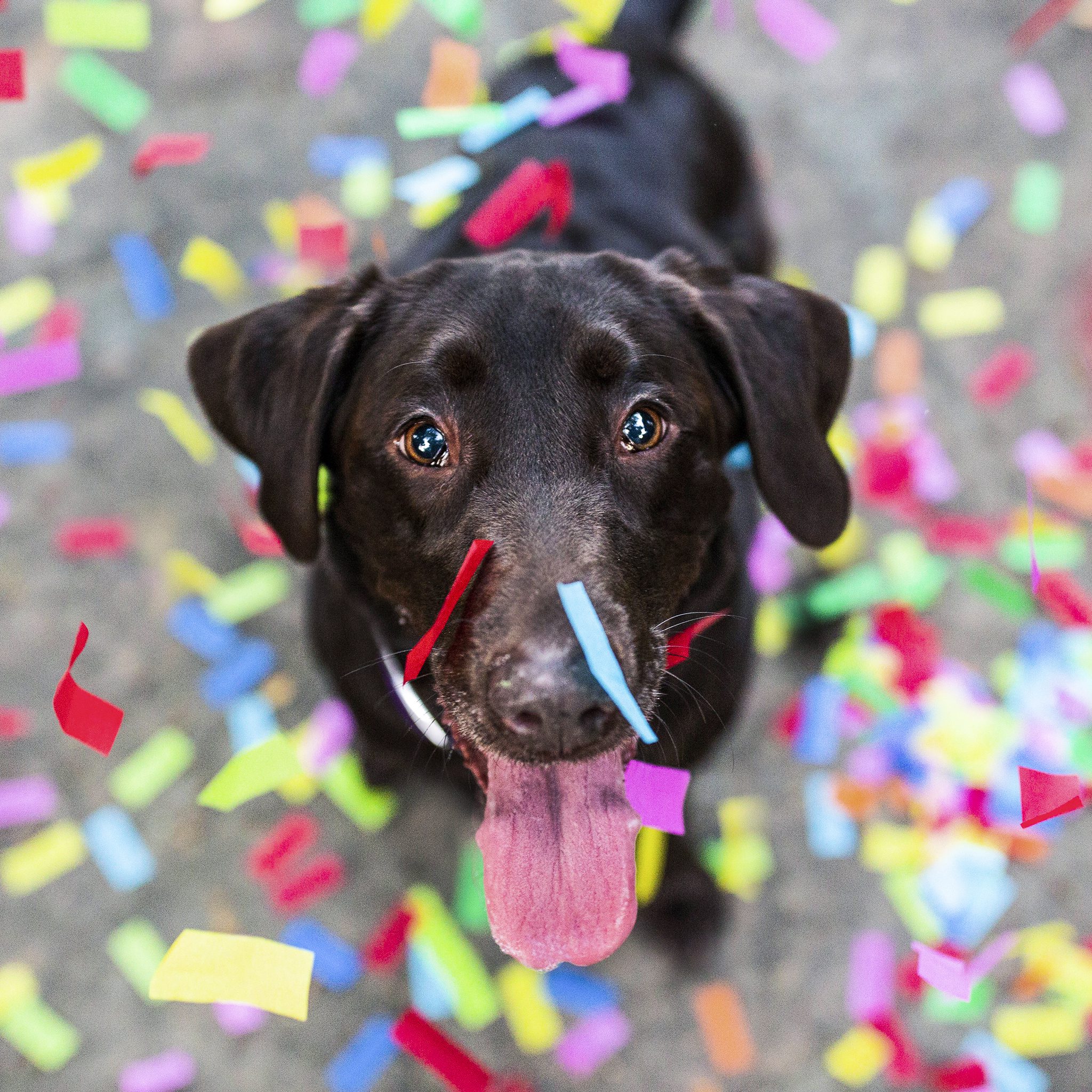